Today I have Victoria Foyt, author of Save the Pearl Part 1: Revealing Eden, and she has graciously answered some questions for an interview. 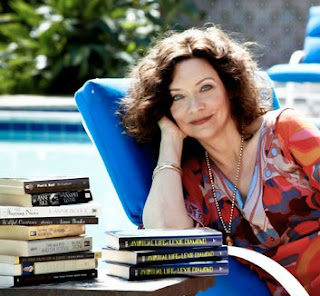 Victoria Foyt's debut novel, The Virtual Life of Lexie Diamond, a young adult fantasy mystery thriller (HarperCollins) was Recommended by The Center for Children's Books, and received a five-star, must read rating from Teens Read Too: “Foyt has created a compelling character and an electrifying story that will hold readers until the last page.”

Born and raised in Coral Gables, Florida, Victoria attended the University of Miami, where she received her Bachelor of Arts in French and Spanish and German. She currently resides in Santa Monica, California. She loves reading--at least two or three books a month--movies, tennis, swimming, hiking, and lots of dark chocolate.

What was your latest epic win?
I managed to fly from Miami to Los Angeles only taking half a Xanax.

Epic fail?
When the plane landed, the passenger across the aisle congratulated me for making it.

What are your thoughts on your book being turned into a movie?
So many readers have enthusiastically said that Revealing Eden “will make a great movie!” that perhaps it may come true. Having made several films myself, I’m well aware of the pitfalls and would hope to have some input about the screenplay and casting, two vital components. That said, film is a very collaborative process, one I was happy to trade for the ownership of my solitary voice in a novel, and in the end, the novelist has to turn over the story to the filmmaking team. It would be very cool to see Bronson the hot jaguar man on screen!

What is the last book you read?
I read the 20th Anniversary Edition of Outlander by Diana Gabaldon while on vacation this winter. The publisher went all out with decorative, padded casing and a very pretty, useful red satin bookmark. I think the last book I read with so much finery was the Bible. Outlander is much juicer, though perhaps just as adventurous.

One question you wish you had a definitive answer to:
Is the universe contracting or expanding? I would sleep better at night if it were the latter.

A quote you live by:
“The secret of health for both mind and body is not to mourn for the past, not to worry about the future, or not to anticipate troubles, but to live the present moment wisely and earnestly.”- -The Buddha

Or as Henry David Thoreau put it: “You must live in the present, launch yourself on every wave, find your eternity in each moment.”

In Your Perfect World…
The Golden Rule would universally rule: Do unto others as you would have them do unto you.

If you could be a superhero, what would you want your superpowers to be?
Foremost, having deep compassion for others.
Secondly, an inability to gain weight despite the copious intake of fatty foods or sweets.

If given a time machine would you go back to the past or into the future?
Off to Paris in the 1920’s to attend Gertrude Stein’s Saturday night artist salons, which Ernest Hemingway, F. Scott Fitzgerald, Pablo Picasso and other great artists frequented. What a great, moveable feast that must have been. And the flapper dresses were divine too.

Do you have any projects in the works? If so can you tell us about any of them?
I’m currently writing Save The Pearls Part Two, Adapting Eden. If Eden Newman thought life and love challenged her in Revealing Eden, the stakes ratchet even higher in the next. Her journey takes her from oppressed, fearful girl to an alpha babe, or Jaguar Babe. She must fight to save those she loves against impossible odds, testing herself beyond her limits—in love and physical strength—while the countdown to humanity’s extinction continues. I’ll tell you, it has been a wild, exciting ride to be in her head!

I’m also working with Sand Dollar Press to expand the incredible, interactive site at SaveThePearls.com where fans have been posting their own “mating” videos or commenting about Eden’s blog posts. Seeing Eden, who is a gorgeous girl by today’s standards, despair over not being able to find a mate and facing death if she doesn’t, or watching her desperation as she secretly meets with her dark-skinned Coal boyfriend really captures her future world. Please check it out! The Facebook fan page for the book is:
https://www.facebook.com/SaveThePearls.

I love to hear from readers! Please visit me at VictoriaFoyt.com or at Facebook.com/VictoriaFoyt. You make it all worthwhile.

Thanks for visiting my blog! I have started reading Revealing Eden and it is so awesome, look for my review real soon!

Revealing Eden: Eden Newman must mate before her 18th birthday in six months or she'll be left outside to die in a burning world. But who will pick up her mate-option when she's cursed with white skin and a tragically low mate-rate of 15%? In a post-apocalyptic, totalitarian, underground world where class and beauty are defined by resistance to an overheated environment, Eden's coloring brands her as a member of the lowest class, a weak and ugly Pearl. If only she can mate with a dark-skinned Coal from the ruling class, she'll be safe. Just maybe one Coal sees the Real Eden and will be her salvation her co-worker Jamal has begun secretly dating her. But when Eden unwittingly compromises her father's secret biological experiment, she finds herself in the eye of a storm and thrown into the last area of rainforest, a strange and dangerous land. Eden must fight to save her father, who may be humanity's last hope, while standing up to a powerful beast-man she believes is her enemy, despite her overwhelming attraction. Eden must change to survive but only if she can redefine her ideas of beauty and of love, along with a little help from her "adopted aunt" Emily Dickinson. Revealing Eden is on sale now. Click here to order it.

The Virtual Life of Lexie Diamond: Lexie Diamond loves her computer. She loves to surf the Web more than anything else--and to the exclusion of a social life. Beyond being just a computer geek, Lexie has developed a unique philosophy that the essential truth about life is found on the Internet, which she navigates with the expertise and finesse of a true believer. Then a tragic accident rocks Lexie's cyber-driven world and forces her to navigate the real world after all. With the aid of an unexpected ally--her first actual friend--not only is Lexie drawn into a mystery surrounding the accident, but she discovers more magic in the Web than she ever dreamed possible. Along the way Lexie's beliefs are challenged, her family is turned upside down, and her future is threatened. In this visionary tour de force by a promising new novelist, Lexie must decide what is real and what is virtual: Her life depends on it.

just sayin,
-Kare
From the brain of Unknown at 5:03 PM

New comments are not allowed.

Aw, look at how cute you all are!

The Name of the Star

The Cavendish Home For Boys and Girls

If you would like me to review a book or host a giveaway or interview please look over my review policies under my policies tab BEFORE sending your request. Thank you!

Because I can't use sticker labels